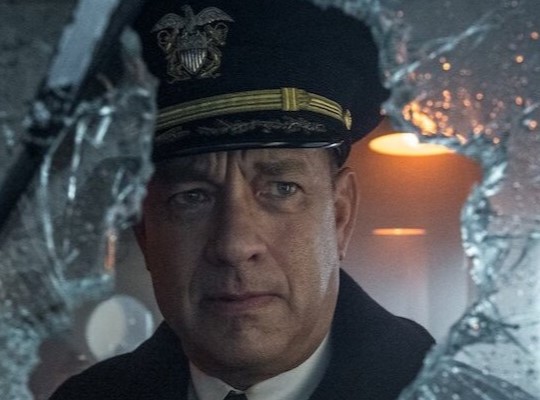 Tom Hanks is enjoying an extended run of captaining films through peril. In his latest, Greyhound, the veteran actor leads a destroyer tasked with escorting a convoy during the Battle of the Atlantic. He gives yet another commanding performance in a thriller that makes the 91-minute runtime feel like a breathless half-hour.

Set in the early days of World War II, Hanks plays Ernest Krause, a character inspired by the C.S. Forester book The Good Shepherd. Greyhound is helmed by Aaron Schneider, a relatively inexperienced big budget film director whose most noteworthy credit may be his role as cinematographer for Eminem’s “Lose Yourself” video. Hanks, who also wrote the screenplay, stars alongside Elisabeth Shue, Stephen Graham, and Rob Morgan, although he receives the vast majority of the screen time.

The film follows the convoy as they enter “The Black Pit,” an area where ships are out of range of protective air cover. Over the course of the film, the Greyhound is harassed by a pack of German U-boats that wreck havoc. The captain struggles to keep his ship afloat against long odds in these early days of the war.

The movie is primarily set on the command bridge of the destroyer and utilized U.S.S. Kidd (the last U.S. Navy destroyer still configured as a World War II vessel) as the primary set piece. The Greyhound shifts between scenes of the crew and capable exterior CGI shots. The shots rotate so frequently that the movie never becomes about the CGI, which is a rarity for a movie of this ilk. 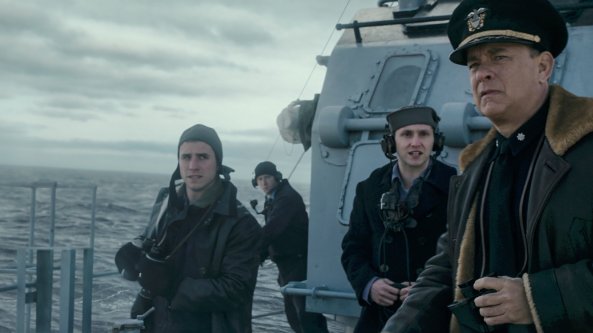 Unlike the recent World War II film Midway, which also made extensive use of CGI, the lack of a grand epic actually elevates the final product. There is little story outside the crossing, but that decision turns the movie into a uncomplicated thriller with the feel of an old school submarine flick. Much of the film is pure action, making the story efficient and faithful to its goals of capturing the harrowing nature of the Battle of the Atlantic.

Schneider’s lack of history with films of this scale does not show itself in Greyhound. The movie is an immersive technical experience that all but sprays cold saltwater in your face as the destroyer crashes through the ocean. Jargon flies with such speed that viewers may get lost in the specifics of the action, but this technique gives a touch of realism to the movie. Greyhound puts the audience in the shoes of sailors much in the same way that Saving Private Ryan allowed viewers to understand the combat experience of D-Day.

During his press sessions promoting Greyhound, Hanks often expressed his disappointment that the film had been optioned to Apple+ instead of a delayed theatrical release. While the spectacle of the Atlantic crossing would have been a captivating theater experience, the rapid pace translates well to the small screen too.

Hanks’ return to the same character type does not feel tired. The actor is in his element as he barks commands and provides a steady hand amidst the chaos. The movie will find a natural audience with military history buffs and offers a fresh perspective on the war. Greyhound is an entertaining streaming choice in a summer devoid of blockbusters and big screens.