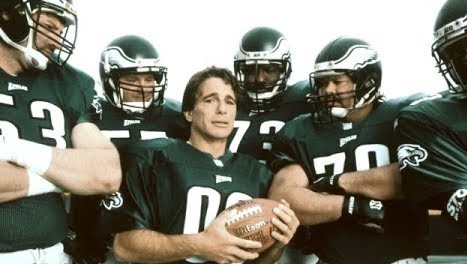 Philadelphia’s cinematic history is synonymous with Rocky, one of the best sports films ever made. The Garbage Picking Field Goal Kicking Philadelphia Phenomenon is not a close second. Released in 1998, the made-for-TV movie does not exactly rival sports flicks from the same era like Little Giants or Angels In The Outfield.

The movie stars Tony Danza as a garbageman who joins the Philadelphia Eagles as a publicity stunt to be their new placekicker. His newfound position initially earns respect from family and a community who had dismissed him as something of an outcast. He somehow finds time to hold his gig as a football player and sanitation engineer simultaneously. Everything is smooth sailing until (spoiler alert), he starts missing kicks and the city turn against him.

Philadelphia turning on an underperforming athlete might be accurate, but the movie just flat out stinks. There is concussion humor that ages as well as Veterans Stadium AstroTurf and coachspeak humor that does not land (i.e. “you couldn’t hit a bull’s butt with a handful of rice”).

The character of Danza’s wife (played by Jessica Tuck), handles his stardom poorly. She nags him for spending so much time at practice and making thousands of dollars at autograph shows (instead of going to school career day.) The writing did not age well, but the movie was not exactly successful at the time either. Variety writer Ray Richmond’s review was capped with the statement:

“Thank God for those “Who’s the Boss?” residual checks.”

Released eight years before Invincible, the film is a poor man’s version of Vince Papale’s real-life transition from the stands to the gridiron. The peak value of The Garbage Picking Field Goal Kicking Philadelphia Phenomenon is Philadelphia Eagles product placement. Any scene with a midnight green logo prominently places Eagles gear in too-obvious fashion.

It’s no coincidence that the movie peaks at Eagles owner Jeffery’s Lurie’s cameo. In addition to owning the Eagles, Lurie has been a successful Hollywood producer. He has been awarded two Oscars for producing the documentaries Inside Job and Inocente. In a moment that is far from Oscarworthy, Lurie sneaks into a scene and says:

“Way to go, Barn. We’re real proud of you, man. This new Eagles owner must be a good guy.”

The greatest indicator of The Garbage Picking Field Goal Kicking Philadelphia Phenomenon’s legacy is that it is not available for streaming through conventional platforms. Disney, who normally maintains airtight control of their vault, has neglected to shut down full-movie VHS rips on YouTube. Thankfully, Disney redeemed themselves eight years later and Invincible gave Eagles fans a solid movie to revel in.