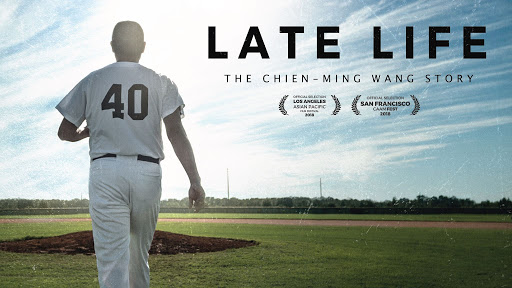 One of the toughest decisions every athlete makes is knowing when to hang up their cleats and call it a career. The baseball documentary Late Life: The Chien-Ming Wang Story, covers the final stages of pitcher Chien-Ming Wang and his attempt to return to the big leagues. The film is an intimate look at the life cycle of professional athletes.

Released in 2018, Late Life gives a brief encapsulation of the pitcher’s career. The Taiwanese icon made his Major League debut in 2005. Wang was the third player from Taiwan to play in the show. He was also by far the most successful. He quickly became a critical member of the New York Yankees rotation. According to the documentary, his status as a national hero meant that his hometown newspaper sold 300,000 more issues on the days he pitched.

An odd injury derailed his career in 2008 and he lost the ability to pitch effectively. The notoriously fragile nature of pitching in baseball is not unusual. Wang’s comeback attempt was. He bounced around to different organizations, but Wang never logged an impactful stay on a roster. The memory of him as a Cy Young candidate faded from baseball’s collective consciousness.

Late Life picks up as he pitched for different organizations in 2015, including the Blue Crabs of the independent Atlantic League. Blue Crabs General Manager Patrick Day best summarized the predicament of an athlete in transition.

“They all got their backs up against the wall, is how they view it. Um…and it’s true their worlds get crushed a little bit. You know, they’re inside an organization, feeling really good about themselves, then all of a sudden they get released.”

Day is one of several people across different levels of baseball interviewed in Late Life. Yankees General Manager Brian Cashman and pitching guru Dave Eiland are the most prominent names whose commentary supplements footage of Wang pitching.

The solid documentary is also bolstered by interviews of Wang’s support team. His wife, parents, and agent all provide keen insight to a pro athlete’s inner circle.

The Late Life soundtrack is reminiscent of Friday Night Lights (2004), offering an existential backdrop to Wang’s journey through various pit stops in North America. It is not a compact narrative of his improbable return to Major League Baseball in 2016, but little about Chien-Ming Wang’s pitching career is linear.

Despite the rhino skin players develop to tune out chatter from the stands and media, Late Life is a reminder that athletes are, in fact, people too. The balance between career and family is a frequent decision that he faces during his return. The merits of chasing an MLB pension and his legacy are also weighed. Watching Wang’s competitive fire drive him through typically inaccessible moments far away from the playing field is a unique look at the person (not just the pitcher).

Late Life: The Chien-Ming Wang Story is currently on Netflix and Amazon Prime.