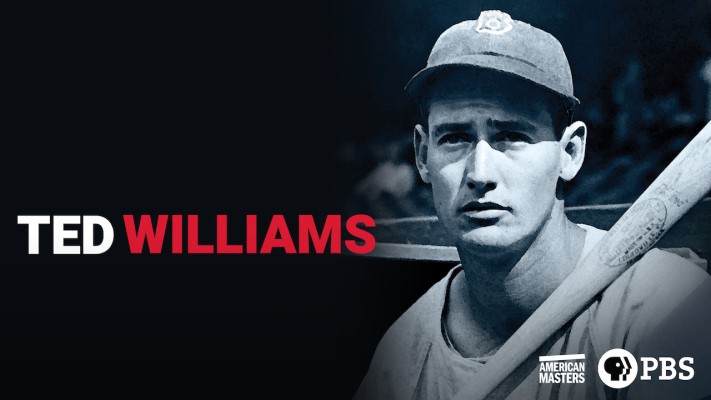 There are few athletes more controversial than Ted Williams. The Splendid Splinter was a generational lightening rod. He was a two time war hero, an enemy of the press and the fans, philanthropist, and curmudgeon. He was also one of the best hitters ever. Undoubtedly the perfect subject for a film, but no Ted Williams revue could come close to touching his life. Such is the PBS documentary American Masters: Ted Williams.

The American Masters documentary about Boston baseball icon Ted Williams scratches the surface of the slugger’s life. The 54-minute film begins with a mythical moment in his career. After being away for over a year to serve in the Korean War, Williams took an impromptu batting practice session at Fenway Park. Showing no signs of rust, he put on a show before he walked away from home plate with his hands bleeding. He had not missed a step.

American Masters covers his obsession with becoming the “greatest hitter who ever lived.” Stunning video captures his .406 season, 1946 World Series disappointment, and all-star heroics. Compared other aspects of his life, the baseball side of Ted Williams is actually the least interesting.

He feuded with writers and fans. He was notorious for unleashing profanity and coming up short as a father and husband. The multi-layered Williams concealed his Mexican heritage, yet advocated for the induction of Negro Leaguers into the Baseball Hall of Fame. In addition to serving in two wars, he performed charitable work with the Jimmy Fund, and was an elite fly fisherman. Bob Costas referred to him as a real life John Wayne in the documentary.

Unfortunately the film falls short. 54 minutes is not enough to capture an icon of Williams’ stature. His towering personality is too much to keep under an hour and a longer documentary would be more appropriate for its subject. As a huge fan of Ted Williams, I hoped for a more comprehensive documentary. With that in mind, it did as well as it could within the condensed format. The video and narrative flow enough to give an overview of his life.

The baseball documentary American Masters: Ted Williams is now on Netflix and PBS.

Fans interested in more information can find that in a handful of fantastic books. The Teammates: A Portrait of Friendship (David Halberstam) and Ted Williams: The Biography Of An American Hero (Leigh Montville).  In The Teammates, Halberstam explores the friends of Williams, Johnny Pesky, and Dom DiMaggio. Montville’s work is an extensive look at the Boston baseball icon that covers different phases

Ted Williams was also the co-author of two books. The first, The Science of Hitting, is a common resource for would-be sluggers. The second, Hit List, ranks of baseball’s great hitters. Both have insight into Williams’ philosophies as a hitter. Hit List is a potent resource for the historical evaluation of hitting. With that in mind, Halberstam’s The Teammates is the best book on Ted Williams for people seeking on Boston’s greatest enigma.