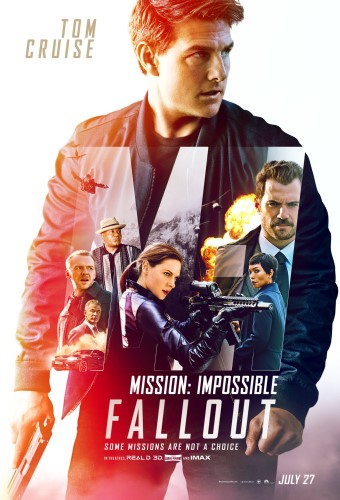 22 years and four films later, I feel the same way.

I loved the action scenes in Mission: Impossible – Fallout. The care that Tom Cruise and Co. take to curate a big screen blockbuster is admirable. There are so many well-shot action scenes that push the cinematic envelope that it is tough to not appreciate that aspect of the movie.

Just from the stunts alone, Mission: Impossible – Fallout is one of the best action movies ever made.

The entire film is a fast vertigo. There are few moments when Tom Cruise is not running, jumping, flying, racing, or fighting. Watching him cut through Paris on a motorcycle is an outstanding big screen visual that I could not turn away from. His track meet through London (one that resulted in a broken ankle) is just as engrossing.

What separates the franchise from its box office rivals is that these scenes appear to be so real. There is never a moment when shoddy film making or obvious green screen enhancement detract from the flick.

The must-see scene is a spectacular HALO stunt. HALO (high altitude – low opening) involves jumping out of an airplane at a high altitude, but not opening the parachute until a lower-than-normal distance. Mission: Impossible – Fallout is the first movie to ever film the stunt.

The sequence was filmed in the United Arab Emirates and involved over 100 jumps. Paramount Pictures put out a YouTube featurette on the HALO jump. The clip below shows how the crew made an incredible, death wish commitment to create something unique.

It is a breathtaking stunt. Watching Cruise descend from the airplane is worth the price of admission. What makes the HALO jump even more impressive is that it took place so early in the movie that it is almost an afterthought.

The acting in Mission: Impossible – Fallout is stellar. Simon Pegg, Ving Rhames, Rebecca Ferguson, and Alec Baldwin all returned to support Cruise’s Ethan Hunt. Angela Bassett delivered a solid turn as CIA Director Erica Sloane. Henry Cavill nailed his performance as CIA agent August Walker. The most impressive actor is Vanessa Kirby (Princess Margaret in The Crown). Her role as the White Widow is campy, but Kirby steals every scene that she is in.

Even with the high-octane action in mind, Mission: Impossible – Fallout misses good character moments. The most memorable action movies go beyond the movie theater. The movie is bereft of one-liners and character development that stand out.

I never felt attached to the story or its characters. This may be a result of my personal gap in the series. It is unfair to negatively review the entire story without having watched those movies. I did appreciate that the ongoing story of Mission: Impossible – Fallout was easy to catch up on. The plot and its cast had grown since the first film, but I never felt lost in backstory.

When Mission: Impossible – Fallout introduced additional story and too crazy plot twists, I found myself not caring. I just wanted to get straight back to the action.

That emphasis on action is both the strength and weakness of Mission: Impossible – Fallout. Unlike the Bourne, Jack Ryan, and James Bond franchises, Mission: Impossible values stunts over story. Ethan Hunt may lack the flair of his action hero counterparts, but he will always trump their stunts.

The franchise is Tom Cruise’s legacy as a box office star. Even with his singular film career in movies like Top Gun, Risky Business, and Jerry Maguire, the Mission: Impossible series represent the actor’s best attributes.

His constant commitment to creating cutting edge films continues to reward audiences. The movie may not be your thing, but as an audience member you know that the film will provide a positive return on your entertainment dollar.

Audiences reward Cruise’s creativity by showing up at the box office. Mission: Impossible – Fallout opened at a franchise-best $61.5 million. It is Cruise’s biggest debut since The War Of The Worlds in 2005. He has not experienced a true bomb since Rock of Ages crashed in 2012.

Hollywood has been the center of a creative crisis over the last few years. The reliance on pre-existing intellectual properties, CGI, and superhero films have torpedoed overall box office numbers. Although I am not a huge fan of Mission: Impossible – Fallout, I appreciate that Cruise has continued to create movies that make me want to go out to the theater with the full knowledge that I will watch something special.