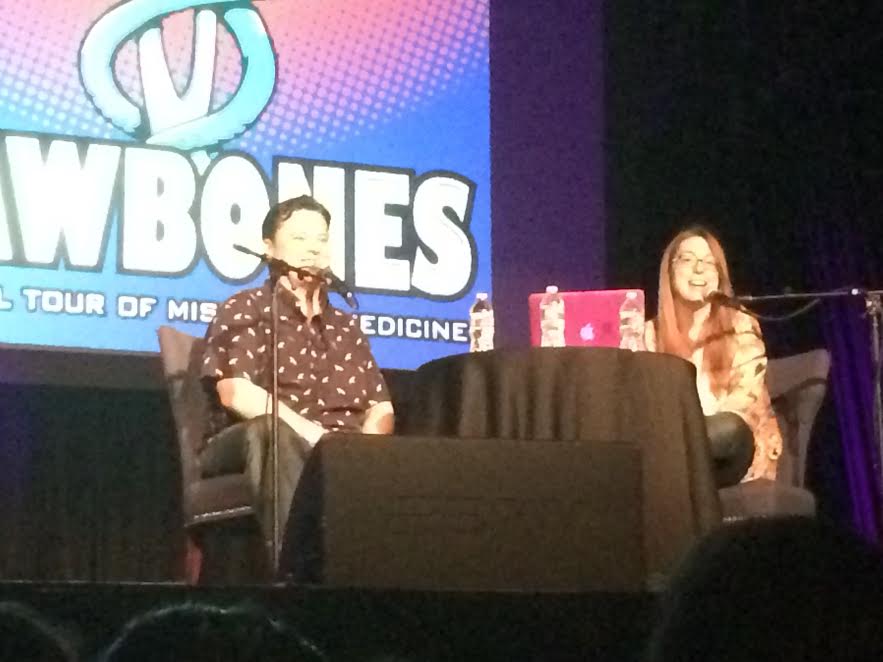 The medical history podcast Sawbones: A Marital Tour of Misguided Medicine hit Philadelphia on July 16 as a part of the Philadelphia Podcast Festival. The popular podcast of Dr. Sydnee McElroy and her husband Justin McElroy gave an enjoyable presentation of Philadelphia’s Mutter Museum as they recorded an episode at the city’s Trocodero Theatre.
The Trocodero was packed with a mostly-millennial crowd who ate up every aspect of the approximately 40-minute show. The audience vocally adored the couple’s stories of their young daughter Charlie’s experience at the Mutter Museum and her weekend mishap in their Airbnb room. As the McElroys got to business, they described the Mutter Museum and its interesting place in medical history. The institution was established in 1858 as a part of an effort from Dr. Thomas Dent Mutter and the College of Physicians of Philadelphia to expand the quality of medical education. The building is located in the Center City section of Philadelphia and has been an important learning tool for both aspiring physicians and fans of the quirkier side of medicine.
The Mutter Museum was the perfect choice for the episode. Many in attendance appeared to have already visited the facility and expressed familiarity with some of the museum’s exhibits like the Soap Lady and the extensive skull collection. As she described some of the building’s features, Sydnee McElroy held up a stuffed replica of a giant megacolon from the museum’s gift shop as a visual aid.
The McElroys were in top form as they discussed the museum. Sydnee provided an amiable discussion of the facility and Justin contributed the dry observations of a medical outsider. Their different experiences captured the essence of visiting the Mutter Museum. She appreciated the institution for its importance to medical history. Justin spent the bulk of the time in the museum gift shop because the visit perturbed their toddler. It is a unique place, but it may not be for everybody. Appropriately, Sydnee mentioned the building’s three most popular fainting areas.

The recording was the first of a five-show bill with podcasts By The Book, Call Your Girlfriend, TV Guidance Counselor, and The Flop House that was a part of the Philadelphia Podcast Festival. The festival, which takes place from July 14 through July 23, features podcasts from different genres. Sawbones’slot gave the festival a high-profile podcast and enhanced its diverse lineup. By adding more shows like Sawbones, the festival can continue its evolution as a special event that spotlights interesting shows in a rapidly-growing medium of entertainment.