Batman is the story of the Caped Crusader fighting for justice on behalf of those who need someone to do their fighting for them. But who fights for Batman when the Dark Knight needs help? The answer: Marc Tyler Nobleman.

The Hulu documentary Batman & Bill examines the creative origins of Batman. When the very first Batman comic was published in 1939, the DC Comics star had been accredited to only one man – Bob Kane. Ever since that comic was published, any television episode, movie, cartoon, or book were all produced with only Kane’s name on the cover or title sequence.

With the guidance of author Marc Tyler Nobleman, Batman & Bill explores how Kane was merely a co-creator. Longtime collaborator Bill Finger was responsible for a large portion of the Batman universe. 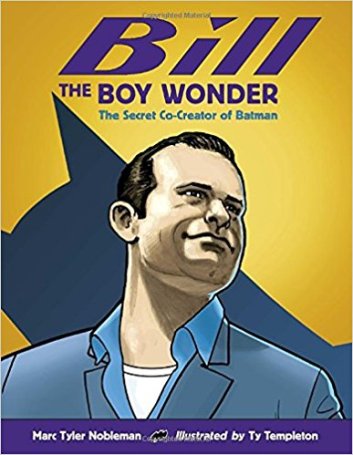 Finger was the creative force behind Robin, The Joker, Catwoman, The Riddler, The Penguin, Scarecrow, Commissioner Gordon, Bruce Wayne, and Dick Grayson. He named Gotham City, the Dark Knight, the Batmobile, and the Bat Cave. He wrote the origin of the story that involved Bruce Wayne’s parents and provided critical cosmetic changes to Batman. Finger essentially developed so much of what we loved about Batman, but until recently he has been largely unrecognized.

The only credit Finger achieved while he was alive was a co-writing credit on an episode of the Adam West Batman series.

Nobleman, who wrote the book Bill the Boy Wonder: The Secret Co-Creator of Batman, shows how he devoted significant effort and research into finding out Finger’s contributions to Batman. He also located Finger’s granddaughter and helped push her into fighting to gain official acknowledgement of his work by DC Comics and Warner Brothers.

A major contrast between the co-creators lives is shown. Kane gained substantial wealth. Finger had a small apartment. Kane stumped at conventions. When Finger died, eviction notices were on his front doorway.

By the time I began watching Batman: The Animated Series in 1992, the Caped Crusader had been around for 53 years. There was never any thought as to how he came into being. Batman had just always been there. The same characters returned in Christopher Nolan’s brilliant trilogy, representing one of the few facets of my childhood that I could relive as an adult.

Finding out that so many dynamic characters that had filled my childhood were primarily developed by one person was fascinating. Learning about their creator’s unknown identity and the struggle to give him proper credit made Batman & Bill a must-watch documentary.