Have you ever wondered what noises you would hear if you were on Mars or why NBC uses three chimes for station identifications? Did you know that NBC once used an extravagant seven chimes and briefly used a fourth during World War II? From 8-bit video game sounds to car engines, the podcast Twenty Thousand Hertz examines the noises that we encounter in our daily lives. The series analyzes sounds that occur so regularly they are rarely thought about in a higher context. By the end of each episode the podcast has created a new take on old sounds. 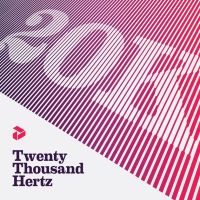 Hosted by Dallas Taylor, 20k Hertz was first broadcast by the studio Defacto Sound in 2016. Most episodes run between ten to twenty minutes long, just long enough to create a different understand of something that is constantly occurring around us every day. Ranging from the routine (dial-up modem) to the unnoticed (The Wilhelm Scream), 20k Hertz even manages to create a level of intrigue about nails scraping across a chalkboard.
20k Hertz features an impressive slate of guests. Foley artists from Skywalker Sounds, Rick Greenhut (the last person to play the chimes on NBC radio), blind film critic Tommy Edison, and the first voice of Siri are just a few of the people interviewed on the podcast.
The series displays a tremendous ability to put sound in perspective. In the episode “Sound Of Extinction,” 20k Hertz allows the audience to dwell on the incredible history of the bells of London’s Big Ben. The tower, which was completed in 1859, has been in operation long enough that with only three notable exceptions its same bells have been heard by Londoners like Jack the Ripper and David Bowie. Even though Big Ben began renovations in 2017, the idea that a visitor could travel to London and hear the same sounds Britain’s most infamous and celebrated citizens have heard for over 150 years is just one of the many fascinating things detailed in 20k Hertz.
Taylor and his crew also delve into some deeper topics. “Space” wonders how humans would hear sound on different planets. “The Mystery Hum and its Government Coverup” probes a government-run Michigan facility that seems so eerie it could wind up as the new plot of Stranger Things.
The podcast not only looks at current sounds, but also how sounds occurred in different eras and how they have changed. In the episode “Dolls That Talk… And Some That Listen,” 20k Hertz explores the evolution of talking dolls. By playing a restored recording from a Thomas Edison talking doll (creepy) you can hear how some of the earliest talking dolls attempted to entertain children. By also highlighting Chatty Cathy (still creepy) and My Friend Kayla (it spies on you), analyzing the progression of the talking dolls of yesteryear to today is a surprisingly engaging topic.
So many of the sounds featured in 20k Hertz can be taken for granted as we go from A to B every day. The podcast and Defacto Sounds succeed in their pursuit of making these sounds seem “insanely cool.” It is not only informational, but 20k Hertz allows a new and more enjoyable appreciation of the noises around us.
In addition to being available as a podcast, past 20k Hertz episodes can be found online at www.20k.org/.

One thought on “Twenty Thousand Hertz, A Podcast That Is Exploring The Sounds Around Us”