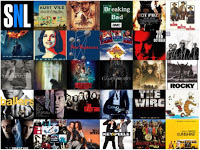 Three years ago I retired my blog Long After Dark. I have no regrets from putting my music blog aside. During that time author Sarah Vowell underscored how I felt at an author event. The author, who was discussing her book, Lafayette In the Somewhat United States, said that she had been a music critic earlier in her career but that she had run out of adjectives to describe the music being reviewed. I totally understand how she felt.
During that time there were certainly enough nights where half-posts were written. Different blogs were considered. Thoughts happened that needed a voice, but were just ruminating inside me and that is not as fun.
I decided to create something different. The Flat Circle (yes, a True Detective reference) will focus on different sections of popular culture. I still plan to post on music, but I will augment that by blogging about topics such as Netflix, last night’s SNL episode (probably not the same night’s SNL episode, I am over 30 now), Game of Thrones, VEEP, podcasts, shows, the Internet, and some Philadelphia-area happenings.
I plan to bring some guest bloggers into the fold. I will always hope to read your thoughts on my thoughts. Feel free to disagree. Especially feel free to agree. This could be a whole new adventure that I hope will be as fun for you as it will be for me.
– John

One thought on “Welcome To The Flat Circle”