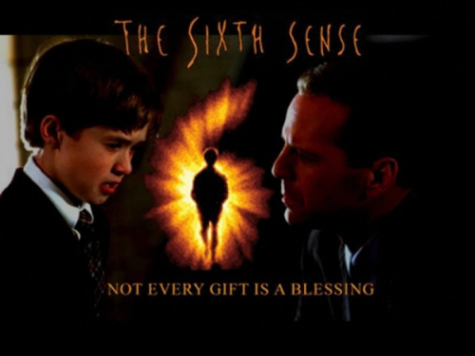 One of my blog goals for 2020 is to watch 100 movies and 30 new films over the next 12 months. The 100 movie umbrella includes new, old, classic, and cult films. A few old favorites are allowed, but the gist is to expand my cinematic vocabulary and plug a few gaping pop-culture holes. This post is less a review than a confession.

Until last weekend, a particularly bad omission was M. Night Shyamalan’s The Sixth Sense. Yes, I was aware of it being a big deal in 1999. Yes, I have lived in Philadelphia for 28-plus years. Yes, the director even went to my grade school. Somehow, it took me 21 years to watch the pop-culture sensation.

In my weak defense, my first theatrical exposure to M. Night Shyamalan was 2004’s The Village. The drama is anti-climatic, disappointing, and forgettable. I remember leaving the movies without the faintest understanding of what the fuss over this guy was really about.

It turns out that it is possible to live in a bubble.

I was aware of the premise of The Sixth Sense: a Philadelphia child psychologist treats a young boy who is being visited by ghosts. I knew of the line “I see dead people.” It is nearly as iconic as the Darth Vader-Luke Skywalker relationship. For two decades I thought that was supposed to be the mind-blowing part of the film. The kid sees dead people. That’s it.

Just as I may have felt on opening weekend 1999, I loved every aspect of The Sixth Sense. The story checked multiple horror boxes and the acting is fantastic. 90% of the way into the movie, I felt the first drags of a story that was going on too long. There was no reason to extend the movie far beyond the big video tape reveal. I didn’t care about the thing with the wife. Why are we still doing this?

I had no idea Bruce Willis died in the opening scene. No clue that there even was a big reveal or twist ending. Somehow, either no one had told me or I had forgotten that there was supposed to be an epic conclusion to the story.

Had I known about the final scene (or even expected it), the thrill would have been gone. My ignorance tuned out to be bliss as I scrambled to dissect M. Night Shyamalan’s trap. Bruce Willis’ unchanged clothes and his one-sided interaction with his wife suddenly made sense. The famous line is not just “I see dead people.” It was really “I see dead people. Walking around like regular people. They don’t see each other. They only see what they want to see. They don’t know they’re dead.”

Like the best murder mysteries, the reveal was right in front of me all along and I was not even looking for it. The moment of clarity felt like getting hit by the weight of cinematic history. 16 years after not getting the big deal about M. Night Shyamalan, I owe the director an apology for not believing the zeitgeist. In hindsight, my willingness to bury my head in the sand allowed me to be blindsided by the scene and enjoy the movie with complete naivety.

The two morals of the first month of my yearlong movie binge have reminded me of two key lessons. 1) Don’t judge an artist by the duds. At least dabble in their successes before passing judgment. 2) Be kind and don’t blurt out spoilers. Even if the movie has been out for 21 years. You never know who has not seen it.