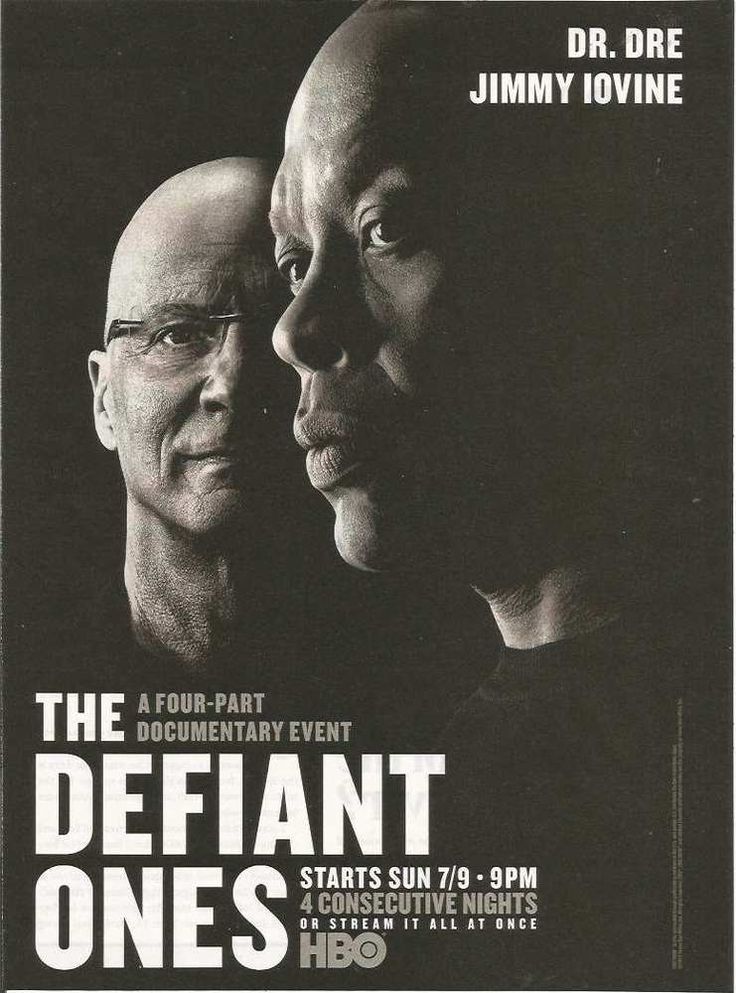 If you are a music fan of virtually any popular music from the last 40 years, HBO’s The Defiant Ones is for you. The four-episode series is a powerful examination of the rise and success of Jimmy Iovine and Dr. Dre, two of the record industry’s most influential figures. The documentary also incorporates each man’s background in a way that is a departure from traditional films and blends different segments of society together. Unlike most music documentaries, The Defiant Ones does not rely on a constructing a film around a few new revelations, but brings a different understanding of its subjects to a uniquely diverse audience that may be watching the docuseries for different reasons. Simply put, it is the best music documentary in recent memory and may be the finest music film ever.

Most music documentaries feel tired. So many of them deify the achievement of the artist or explore nuances of the recording process in ways that are not accessible to the casual fan. The extent of Iovine and Dre’s accomplishments do not allow this to be an not an issue with The Defiant Ones. Iovine has been a driving force behind so much timeless music (Bruce Springsteen, Stevie Nicks, Tom Petty) that it would be hard to spend much time listening to classic rock radio without hearing a song that he influenced in some way. His work with Interscope Records also helped bring artists like Nine Inch Nails, No Doubt, and even Rico Suave into the forefront of pop culture. Dr. Dre’s own discography is of similar notoriety. Not only did he break out of Compton, CA with the World Class Wreckin’ Cru, but he broke down cultural barriers as a member of N.WA. and as a solo artist. As a producer, he has influenced a plethora of artists as well, most notably Eminem. In The Defiant Onesit is Eminem who best defines their successful relationship as “Jimmy Iovine is the levitator. Dre is the innovator.”
One of the most striking attributes of The Defiant Ones is the star power that has revolved around both men’s rise to success. The diversity of the cavalcade of stars is evident during the beginning of the first episode, when Iovine receives consecutive street cred nods from both Tom Petty and Sean Combs. Not every documentary can find common ground between the most important moments of hip-hop, alt rock, and classic rock, but the blend of talent that revolves around Dre and Iovine allows the film to become an unusually comprehensive documentary of modern music.
The documentary is also not a straight-up love letter to either man. While their achievements are deservedly celebrated, neither is lionized to an extreme and both have their faults explored. Iovine’s relentless personality and Dre’s past issues with the abuse of women (particularly his 1991 incident with television host Dee Barnes)are addressed by the filmmakers. The documentary also digs into the deadly East Coast-West Coast hip-hop wars of the 1990s. Iovine reveals personal misgivings about funding the music scene that led to so much violence. The benign toxicity of the situation remains clear when Dre declines to discuss his knowledge of events from this time with the cameras still on. This is a refreshing aspect of The Defiant Ones. So many documentaries gloss over the faults of its subjects, but this series gives both men a chance to discuss the negatives in their past. Even though Dre was understandably not forthcoming about the hip-hop rivalry, his stance felt genuine and did not appear to be a false posture for the benefit of the filmmakers.
Another stimulating aspect of the series came from an unexpected topic: business. Many music documentaries stray from discussing the business side of the record industry. It is an unromantic aspect of the art form, but it was an unavoidable topic for The Defiant Ones. Both Dre and Iovine’s influence in the industry transcends their eye for top talent. They don’t merely have their finger on the pulse of music; they control an influential stable of artists. After discussing the rise of Interscope Records, the slightly reverential fourth episode focuses on their role in creating the Beats By Dre headphones brand and its $3 billion sale to Apple in 2014. By ending the docuseries with this aspect of their lives, The Defiant Ones reaches for a grander point in the careers of the two moguls. Not only have they defined the music of multiple generations, but they now define the style in which it is listened to.
The Defiant Ones is a well-done snapshot of a broad variety of music, culture, and industry that it is more appropriately aligned with CNN’s ongoing Decades series than just a music documentary. The constant star power that is featured in the series is atypical for a documentary with a focused topic. By including so many artists and pop-culture icons, the guests demand constant attention from the audience. When Gwen Stefani, Diddy, Trent Reznor, and Snoop Dogg speak, it is hard not to listen to them discuss Iovine, Dre, and the moments that have defined the two moguls. Because their success is not merely widgets, but also Born To Run, The Chronic, The Slim Shady LP, and The Fame, the transcultural success of both men also reflects the music and moments of our own lives. Like Iovine and Dre, the broad impact of The Defiant Ones is unparalleled and transcends the customary norms of documentaries.